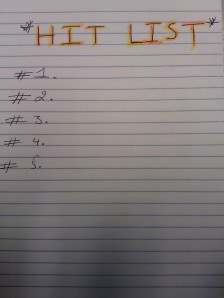 If every Lebanese was asked to write down the names of five people he/she would like to see dead before the end of the day, knowing that their request would be granted, I guarantee you that the following morning we will wake up to a country with not one politician left. Now one might think that every Lebanese person hates the entire political crew, but this is where you’d be wrong. They only hate the parties that do not represent their religion and sect in particular. If they have it their way, they would rather eliminate any obstacle or in this case any other party that stands in their affiliation’s way.

Being a Lebanese myself, I think I can somehow project how the majority of Lebanese think.

Here it goes, if I have a list of Five:

To begin with, I will keep two names aside just in case something arises at a later point. Those would be like the Jokers in a deck of cards that I can use whichever way I want and whenever I please.

So now I am left with three names to write down.

I can’t just go ahead and write down the names of the high ranking politicians, because one way or another it would be redundant for I am sure someone else will have them on their list. Why one might ask? Simply because that person might have had a project that was turned down, or was asked for some percentage in return for a simple signature on a form. I guess you get the point; these officials have their own haters.

So those high ranking ones will be cleared out by others, if not, that’s where my two jokers will come into play. I would only need to choose only two names simply because any Lebanese will select only two of the top three but never all three at the same time.

Next we’re left with the parliament members. There are only a few of them compared to the 4 million people in Lebanon and the remaining 6 million outside of Lebanon who have a list of 3 blank names left, which makes up around 30 million variations provided they all keep two names as backup jokers. But we all know that the Lebanese don’t trust each other. So even if you write a name down, another person will definitely write it down too, just because you can’t be too careful and it’s better to be safe than not. It’s like double checking.

Since the Lebanese are known to be very smart, they know better not to waste their time with a name of a politician that represents a section, a city or a village other than theirs because they know for a fact someone from that area will get to the name, so they try to keep it local.

If however, the politician that represents them has won the last election and is currently a parliamentary member, they would then write the names of his 3 top members of the opposing party. If their representative failed in the last election, then it goes without saying that the currently serving will make it to their list.

In some cities and villages or sections of Lebanon, there is an overwhelming majority of one party. Of course those choosing the names wouldn’t wish anything bad to their leaders, so they will start writing down the names of the leaders of the opposing parties.

So far, we have the top 3 positions eliminated, then the leaders of all the parties, then all the parliament members as well as their next in line or their competitors. But what about the politicians that still exist, those we barely hear their voices or see their faces, they could very well surface when the dust settles?

Again, the Lebanese have a solution for that. And with that solution comes money. So just like money floats around during the election season, money will start playing an important role. You will see people filling out the list  of five names and will actually buy a couple more lists from people who are financially in need. They would manipulate their cousins and family members to fill out names they haven’t selected themselves. After all it seems like they want to diversify their lists.  That way, they can surely get a goodnight sleep knowing that every name they can think of, gets shot, stabbed, or blown up.

The end result will be a new day with no politicians, but the question remains, how long before we see the same flags being raised again and a new government with new names being formed? If I were to answer that, I would say before sunset of that same day, because our governments are not formed within, they come pre-packaged and poorly wrapped from the different corners of the world.